The story of the founding of St. Augustine cannot be told without including the story of the colonization of the southeast section of the United States. Known today as the nation's oldest continuously occupied city, St. Augustine's history is firmly interwoven with the fates and fancies of many nations and people. 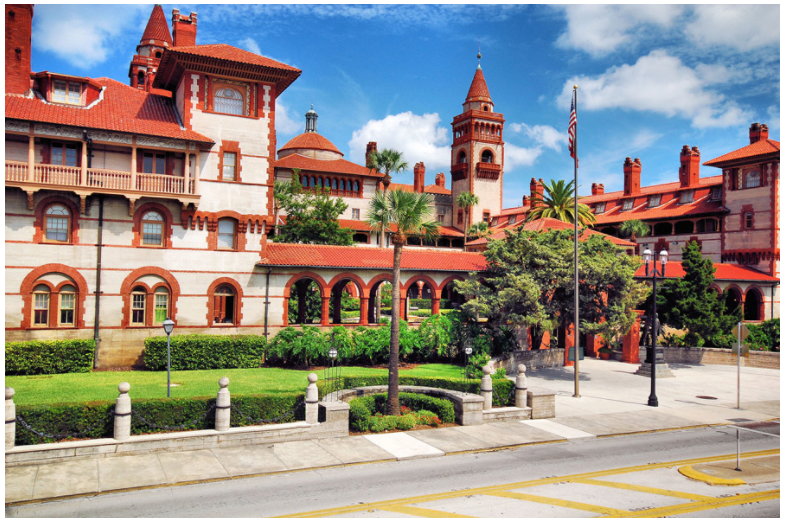 Florida was discovered by Don Juan Ponce de Leon, a former governor of Puerto Rico. He sighted the eastern coast of Florida on Easter Sunday, March 27, 1513, while in search of gold and silver. Ponce claimed the land for Spain and named it La Florida.

In the following half century, the government of Spain launched no less than six expeditions attempting to settle Florida, but all failed. In 1565, the French succeeded in establishing a fort and colony near the mouth of the St. Johns River, and in doing so, threatened Spain's treasure fleets which sailed along Florida's shoreline. As a result, King Philip II named Don Pedro Menendez de Aviles, Spain's most experienced admiral, governor of Florida and instructed Menendez to explore and colonize the territory. King Philip also instructed him to drive out any corsairs or settlers of other nations, if they should be found in Florida. 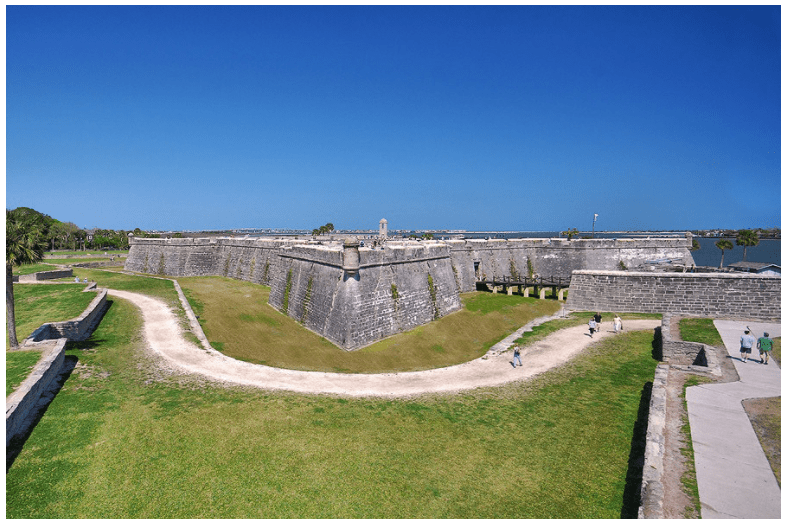 Sir Francis Drake, the English corsair, pillaged and burned the town in 1586. Then in 1668, another pirate, Captain John Davis, and his English buccaneers plundered the home and left 60 persons dead in the streets. Clashes between the Spaniards and the British became more frequent when the English colonies were established in Georgia and the Carolinas.

The year 1672 saw work begin on the stone fortress, now called Castillo de San Marcos. The fort was nearly completed in 1696, but not officially dedicated until 1756. Attesting to the strength of the fort, in 1702 Governor James Moore of Carolina led a two-month siege without success, and in 1749, an even stronger attack by British General James Oglethorpe of Georgia was beaten off.

In 1763, the stroke of a pen accomplished what pitched battles had failed to do. Spain gave Florida to Great Britain in exchange for the newly conquered Havana, and St. Augustine came under British rule for the first time. England ruled the city and the territory for 20 years, which included the period of the American Revolution. The citizens of the city remained loyal to the crown throughout the span. In 1783, under the terms of a treaty signed by England, France and Spain, Florida, and St. Augustine returned to the rule of Spain, which lasted for 37 years. 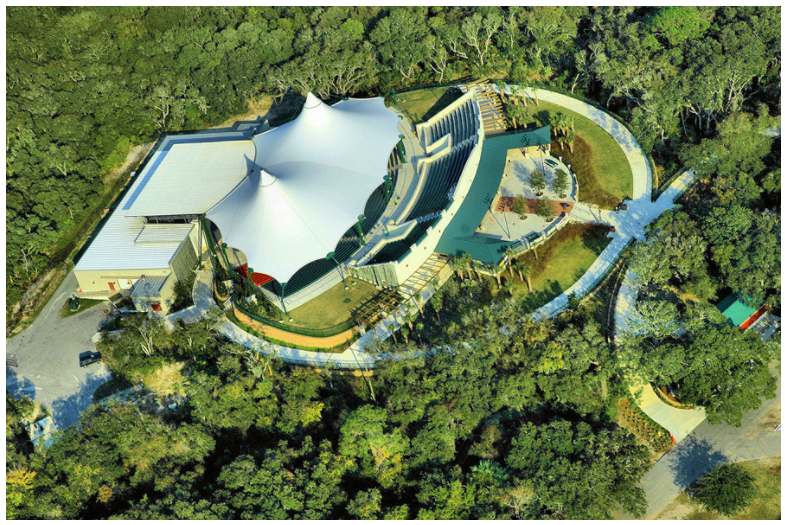 In this period of the world's history, many changes were taking place in Europe and as a result, Spain sold Florida to the United States. At a colorful military ceremony on July 10, 1821, troops of the United States took possession of the territory and the Spanish soldiers departed, never to return again.

In the Second Seminole Indian War (1835-1842), the Indians made a desperate attempt to regain control of Florida from the Americans. In 1837, two prominent Seminole leaders, Osceola and Coacoochee, with a number of warriors were captured just south of St. Augustine where they had come under a white flag for a parley with the Americans. All were imprisoned in the Castillo from which Coacoochee and 20 of his followers managed to escape. Osceola, however, was transferred to Fort Moultrie at Charleston, SC, where he died.

The end of the Seminole War made Florida safe once again for visitors, who came to take advantage of the fine climate. In 1845, Florida became the twenty-seventh state of the Union with Tallahassee selected as the state capital. This was a compromise between St. Augustine and Pensacola, both of which were difficult to reach from most parts of the state.

St. Augustine continued to prosper until it was interrupted by another conflict, the Civil War. Slaves in this area played a minor role in the economy as compared with the rest of the state, and there was considerable Union sentiment in the city due to the number of northern-born residents. Florida, however, seceded from the Union, and according to letters,"It was announced here by the firing of cannon and musketry and much shooting."

In March of 1862, a Union blockade squadron appeared off the inlet and demanded the city's surrender. During the night, the small Confederate garrison withdrew and the city was then occupied by Union forces who remained until the end of the conflict.

During the winter of 1883-84, Henry M. Flagler, one of the co-founders of the Standard Oil Company, visited the City and was impressed with the charm and possibilities of the area. As a result of his interest, he built the magnificent Hotel Ponce de Leon and the Alcazar Hotel.

Flagler purchased the newly constructed Hotel Casa Monica, renaming it Hotel Cordova. With the opening of these three, the wealthy and fashionable flocked o St. Augustine, soon to become known as the "Southern Newport". Flagler purchased the surrounding railroads at the same time as he started his hotels, marking the beginning of the Florida East Coast Railroad. Eventually, he extended FEC down the east coast of Florida, first reaching Palm Beach and then Miami in 1896.

The progress made by men such as Flagler also took its toll. The old and battered buildings inevitably gave way to the modern. Many old houses and the remaining sections of the defense lines were uprooted to make way for new buildings. In those days, these changes were hailed as a great improvement.

St. Augustine has again become a major point of interest for tourists. Now, however, instead of just a winter playground, St. Augustine, rich with the heritage of the past, has become an important center for visitors all year long. 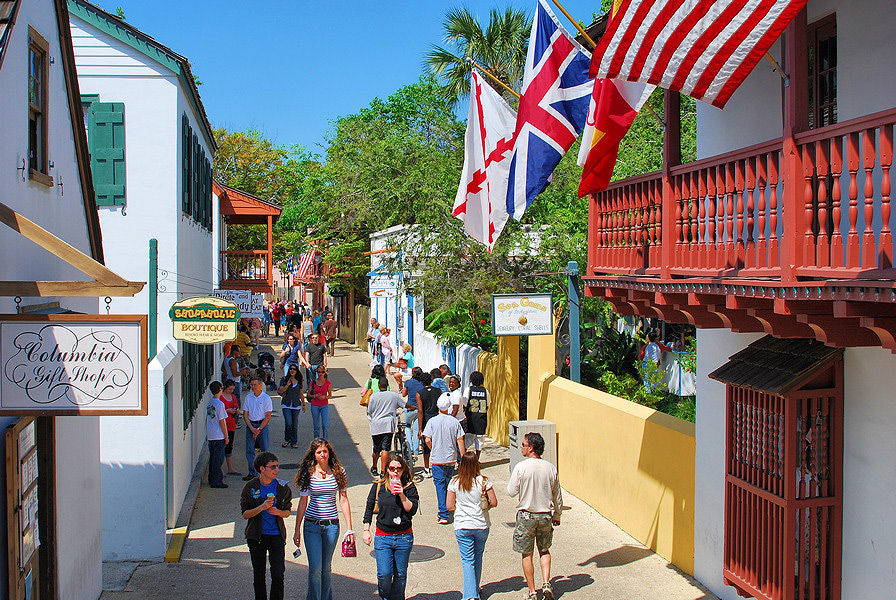 St. Johns County has something for everyone, enticing more than 4 million visitors from around the world each year.

Founded in 1565 by the Spanish and now referred to as “The Nation’s Oldest City,” the City of St. Augustine reflects a Spanish influence in its architecture and art galleries, street names and dining options.  It is home to more than 50 attractions including historical sites and points of interest, living history museums, animal parks and ghost tours.

Many are located within walking distance of one another in downtown historic St. Augustine, while others in the uptown antique area or across the Bridge of Lions on Anastasia Island are accessible via tourist transportation, making it possible to see it all without having to move your car!

Guided walking tours, as well as those conducted via tram, trolley, horse-drawn carriage or cruise boat all, offer unique narratives of the story of historic St. Augustine, covering some of St. Augustine’s most popular landmarks.

Bridging the past with the present and future, just North of St. Augustine is the World Golf Village, a resort-style community built to celebrate one of the world’s greatest and most beloved sports.  With the World Golf Hall of Fame museum as its centerpiece, the area is also home to two Hall of Fame member-designed golf courses, an IMAX Theater, luxurious accommodations and an assortment of restaurants

SEARCH FOR HOMES IN ST. AUGUSTINE