Sing Out Loud Music Festival Line up Announced FOr 2018 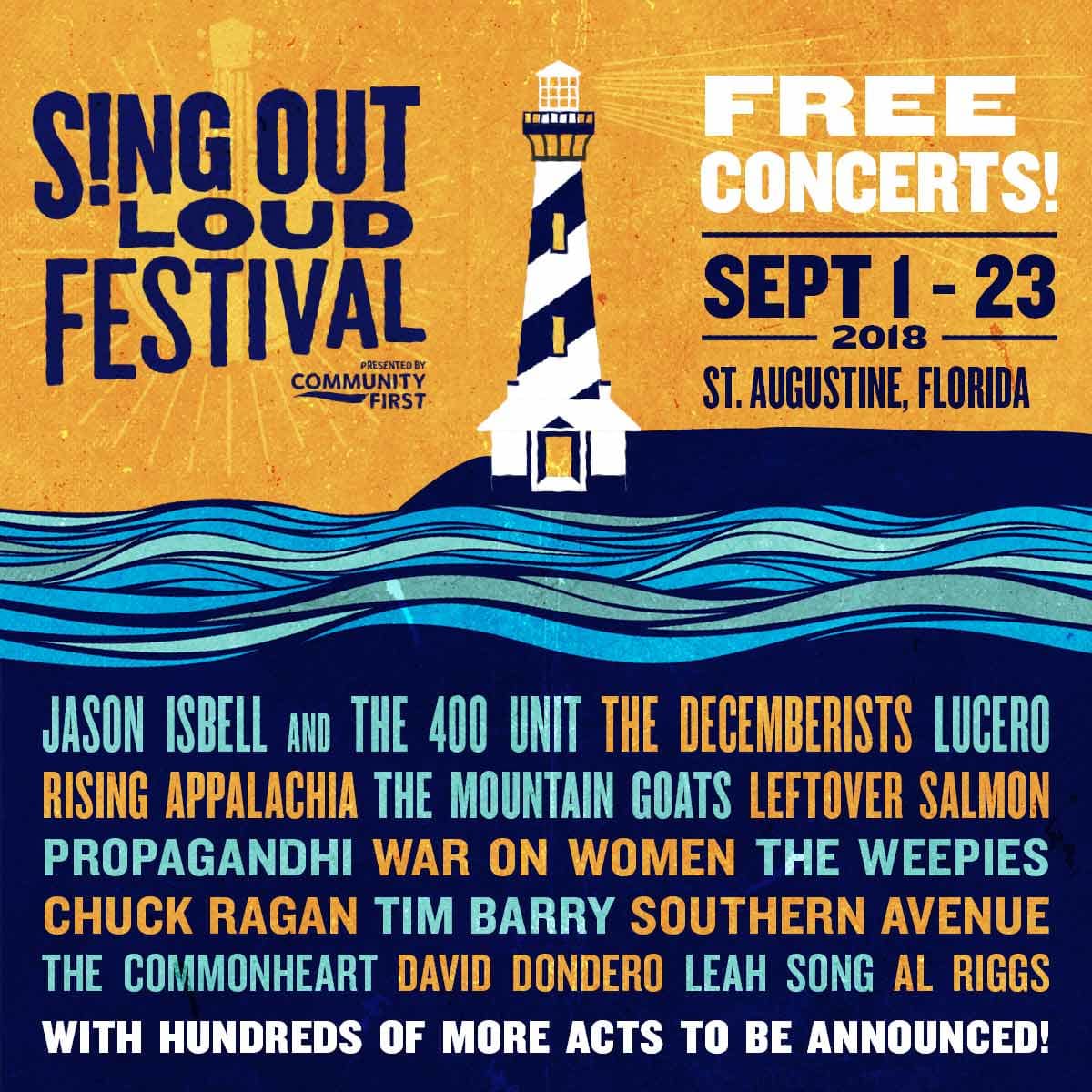 Hoping for better weather but the same enthusiasm and reception from locals, the St. Augustine Amphitheatre staff is putting together the third installment of the Sing Out Loud Music Festival and already has its top acts scheduled.
The headliners of the September festival were announced Monday. Jason Isbell and The 400 Unit, The Decemberists and Lucero will be the main headlining show Sept. 22 at the Amphitheatre.
Other headliners include Rising Appalachia, The Mountain Goats, Leftover Salmon, Propagandhi, War On Women, The Weepies, Chuck Ragan, Tim Barry, Southern Avenue, The Commonheart, David Dondero, Leah Song and Al Riggs. More shows with local and regional artists will be announced later.
Sing Out Loud will feature hundreds of shows over the course of four weekends in September, starting Sept. 1. Venues are still being secured, and most will be in or around downtown St. Augustine. However, the Ponte Vedra Concert Hall is being integrated into the festival this year.
All of the shows will be free to spectators except for the Sept. 22 headliner event at the Amphitheatre. For that show, fans can secure a ticket by making a donation of at least $25 to the Betty Griffin Center in St. Augustine. Tickets for the performance will go on sale at 10 a.m. Friday — online only at ticketmaster.com.
The Betty Griffin Center offers protection and services for the victims of domestic violence and their minor children and/or victims of sexual assault and their families in St. Johns County.
Ryan Murphy, the director of St. John’s County Cultural Events Division and organizer of the festival, said the artists helped decide which charity to assist with the show.
Two years ago, the festival helped raise money for victims of the Pulse nightclub shooting through the United Way.
Sing Out Loud Music Festival initial headliner lineup schedule
(Full schedule to be released in the summer):
Sunday, Sept. 2
The Backyard at the St. Augustine Amphitheatre
Performances by: The Mountain Goats, The Weepies, David Dondero, Al Riggs and more
Friday, Sept. 21
The Backyard at the St. Augustine Amphitheatre
Performances by: Rising Appalachia, Southern Avenue, Leah Song and more

Performances by: Propagandhi, War On Women and more
Ponte Vedra Concert Hall
Performances by: Leftover Salmon and The Commonheart
And last year, the festival provided some relief for residents dealing with the aftermath of Hurricane Matthew. The storm forced the cancellation of the first weekend of shows, but Murphy and his team were able to regroup quickly and make sure the other shows went on as planned.
“It solidified in my mind that the staff here is really brilliant and resilient when it comes to making sure we pull stuff off,” Murphy said. ”(And) it kind of softened the blow for people in pretty bad situations.”
The festival is paid for by a grant from the Tourist Development Council — which oversees funds from the county “bed tax” on short-term lodging — and sponsorship by Community First Credit Union.
Some see the event as a way to draw more tourism and stir more business in the hospitality industry during one of its slowest months, and it certainly does that. But Murphy said his focus is on offering the community a chance to see a variety of musicians for no charge in most cases. And he also wants to provide a boost to local musicians.
“My whole mission with this, what we’re trying to do, is really just elevate the local music scene and kind of get everybody in town all in one festival,” Murphy said. “A lot of us come from a music background, so we know when a community supports the local artists, you can feel it. It really helps.”