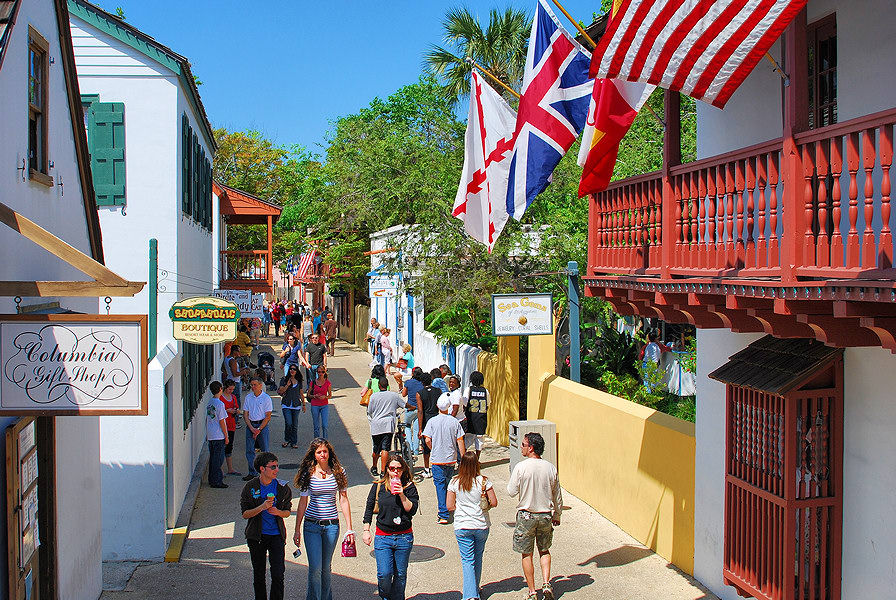 But one of the reasons this area has become so popular with new residents is that so many of them started as tourists. It’s an industry that tracks its ascendance right along with housing development.

Once popular as a spring/summer beach destination, this county has turned into a place where there’s rarely a weekend without crowds of visitors on St. Augustine’s historic streets.

“People come for a visit and they fall in love with it, and they start looking for properties while they’re here to get a feel for housing costs in St. Augustine,” said Victor Raymos of the St. Johns County/St. Augustine Board of Realtors.

It’s makes sense that people would want to live in a place where they enjoyed a trip. But Florida welcomes more than 100 million visitors per year, and there is immense competition to lure those tourists and open their wallets.

Richard Goldman, the head of St. Johns County’s visitors and convention bureau, said it’s no accident that this area became a major destination after decades of being only partially discovered or appreciated.

Of course, the county’s location and natural beauty were sure to land a certain amount of visitors, but Goldman said this destination first came to the nation’s attention with the 400th anniversary of the founding of St. Augustine by the Spanish.

It also drew some unwanted attention during the civil rights era when Dr. Martin Luther King Jr. and other leaders encountered angry pushback during their quest to end segregation.

Tourism continued to move up as Florida gained popularity as a destination, the opening of Walt Disney World near Orlando in 1971 being a watershed moment.

Goldman said St. Augustine and the rest of the county grew in the 1980s, thanks in part to the creation of a marketing organization as the “bed tax” was adopted in 1986. He said the expansion of the University of Florida also played a role in the appeal of this area as more students found their way here.

“Once UF became this huge collector of young people and academics, the closest place (to go to the beach) was right at the end of (State Road) 206 at Crescent Beach,” Goldman said.

As a sign of St. Augustine’s effort to grow the tourism industry, the city introduced the Nights of Lights celebration that’s now closing its 24th year.

More recently, Goldman said Mumford & Sons’ Gentlemen of the Road Stopover in 2013, which preceded the 450th celebration in 2015, was a major lift for St. Augustine’s image as a place for younger travelers as much as older ones.

“We’ve hosted a lot of different people in the arts community, but that didn’t necessarily create these momentous awakenings to the destination the way this confluence of events (did),” Goldman said. ”(It) all of a sudden created this new audience for us.”

Those events helped almost immediately as the county drew an estimated one million more visitors in 2015 (6.3 million) compared to 2014.

And why does this area continue to appeal to visitors and keep turning some of them into residents? Well, there are many reasons, but Goldman said a large part of it is because the destination continues to differentiate itself with true historic sites and comfortable beach spots.

“It (history) distinguishes us from other destinations,” Goldman said. “It’s Florida. There are beaches everywhere. Relatively lower density, that’s a benefit (here). Lack of high rises. That’s a thing that distinguishes us.”