As early as 1586 the Spaniards built a watchtower near the inlet to spy out approaching ships and they were quick to discover the usefulness of the coquina pits as a source of material for their more substantial building. It was hauled by oxcart to the banks of Escolta (Quarry) Creek, in those days not so marshy, which runs roughly parallel to Coquina Avenue on Davis Shores, and then ferried by barge across the bay. It is believed that the old chimney and well near the quarries are all that remains of a barracks where the workmen lived. 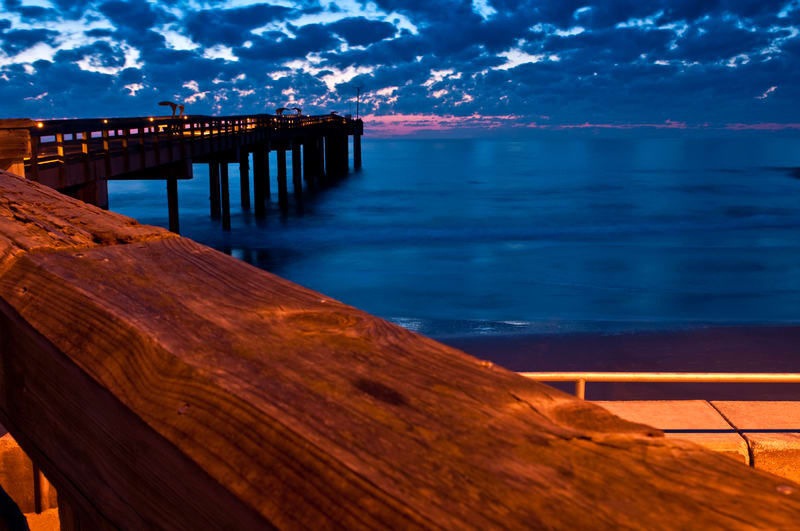 If the Spaniards ever swam and surfed in the ocean, there is no record of it, but in the 19th century, the island became a mecca for beach-lovers. They crossed Matanzas Bay in sailboats. One lady, Mrs. Bertha M. Peele (nee Barnitz) who spent the winter of 1879 in St. Augustine as a child, bemoaned the bridge when she returned as an old lady in her nineties because she felt it spoiled the beauty of the harbor.

Once across, the early holiday-makers had a problem in getting to the ocean side. It was solved by Paul Capo who provided a horse-drawn railway which traversed the marsh on wooden rails over a narrow, causeway. Later, when the bridge put him out of business, he moved his conveyance to Capo's North Beach which he operated for many years. Many people can still remember riding from the North River to the beach in the horse-drawn car.

The first bridge, all of the wood, started at the foot of King Street. Over it ran the South Beach Railway, known as the "old Dummy Line." Edward Forward was the engineer who operated a little steam locomotive which pulled two small cars. Later on, it was replaced by a trolley car.

When the trolley lines ceased operations in 1930, South Beach went into a temporary decline, since the teenagers of the day found it too far to go on their bicycles and then the family car was not so easy to get. They began to swim at Anastasia Beach (now Lighthouse Park), at that time, a 200-foot expanse of white sand, which the city fathers decided to improve. Umbrella-like palmetto shelters were set up and in 1932 the municipal fishing pier opened. Miss Raymondine Ponce cut the ribbon on opening day, Mayor T. Rogero Mickler made a speech, and there was a fishing contest supervised by Ray Hellier, won by Carl Todd for the biggest fish and Winton Rogero who caught the most. South Beach began an era of redevelopment soon after with its own fishing pier.

Anastasia Island's trademark, of course, is the lighthouse. The Spaniards had erected an improved watchtower of stone and in the days when the British ruled, a cannon was mounted on it which was fired to announce a vessel was off the bar. In 1824 it was converted into a lighthouse by an oil lamp atop it, first lit on April 3. The sea, however, began to encroach on the foundations of the old building and in 1874 the present, a spiral striped lighthouse was built. It was just in time since the old one tumbled into the sea finally, in 1880.

On the bayside of the island, drastic changes came with the arrival in town of D. P. Davis, the real estate developer of the 1920's, who filled in the marsh and envisioned a vast complex with winding waterways, golf courses, and big hotels. But the real estate boom burst, and it was not until after World War II that Davis Shores came into its own as one of St. Augustine's finest residential areas.

Today Anastasia Island is a mix of residents and businesses who enjoy the proximity to the Intracoastal and ocean as well as the historic area of St. Augustine. Attractions include the Alligator Farm, St. Johns Fishing Pier and St. Augustine Amphitheater.